IECC held its 2009 year-end party at Ashoka Ginza in traditional style, with Indian food and Japanese beer. This time the party had an added significance as this was also one of our key member Bobby Philips’s farewell party.

After many bottoms-ups and onegos it was time for IECC president Biju to reflect upon our performance this year. President was justifiably bit disappointed with IECC’s performance this year. Pointing specifically towards the losses against ITCC a relatively new team in Japan he urged the members to do some soul searching and to do everything in their power to bring the past glory back to IECC. He drew attention toards the aging core members of IECC and stressed upon the importance of infusion of new young blood into the team and asked support of every existing members to help out in the recruiting process.

Next was Captain Sanjeeb’s turn. Taking responsibility for the poor show of IECC this year and sharing the same view as the president Captain pointed out towards some achievements which IECC can take pride on. One of them being beating YCAC 3 times in a row in their own backyard. He also drew attention towards unavailability of enough players when it comes to travelling out of Tokyo. Captain also proposed a solution to the problem by suggesting to have a IECC’s own ground near by area and briefed the team about the progress in that direction.

Everyone including the president and captain expressed a deep sense of loss considering that we will miss one of our most dynamic member Bobby next year. Not only he will be missed in the cricket ground we all will miss a really great friend and one of our great motivators. And of course we will miss his speeches and the curve negotiating skills on the Tomei:)

Next it was Bobby’s turn to light the party with his fiery speech. Bobby spoke for several hours and did not stop until the restaurant manager requested him to stop as it was time to close the restaurant:) This time for a change it was a fiery come rainy speech. It made some the members to cry. In fact even the sky cried that night:).Sensing danger and possibility of a typhoon our treasurer Bikash intervened and distributed the special achievement awards in a hurry.

Here is a picture from the party. More pictures are in Bob’s camera. he has promised to send them to us from Australia. 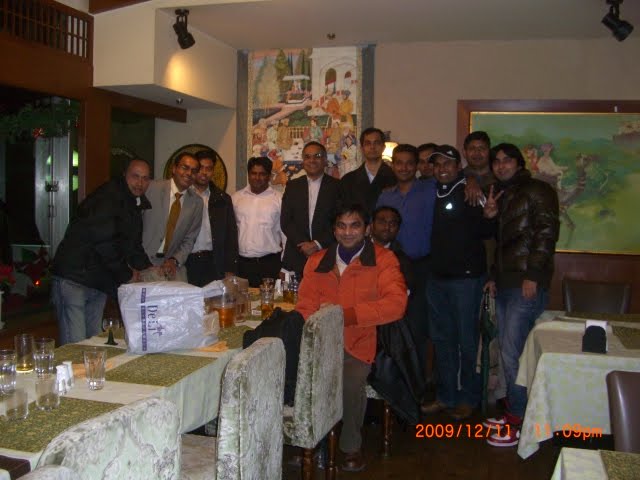 p.s. Thanks to Yogesh and Biju for making the arrangements for the party and to Bikash for arranging for the presents and prizes.