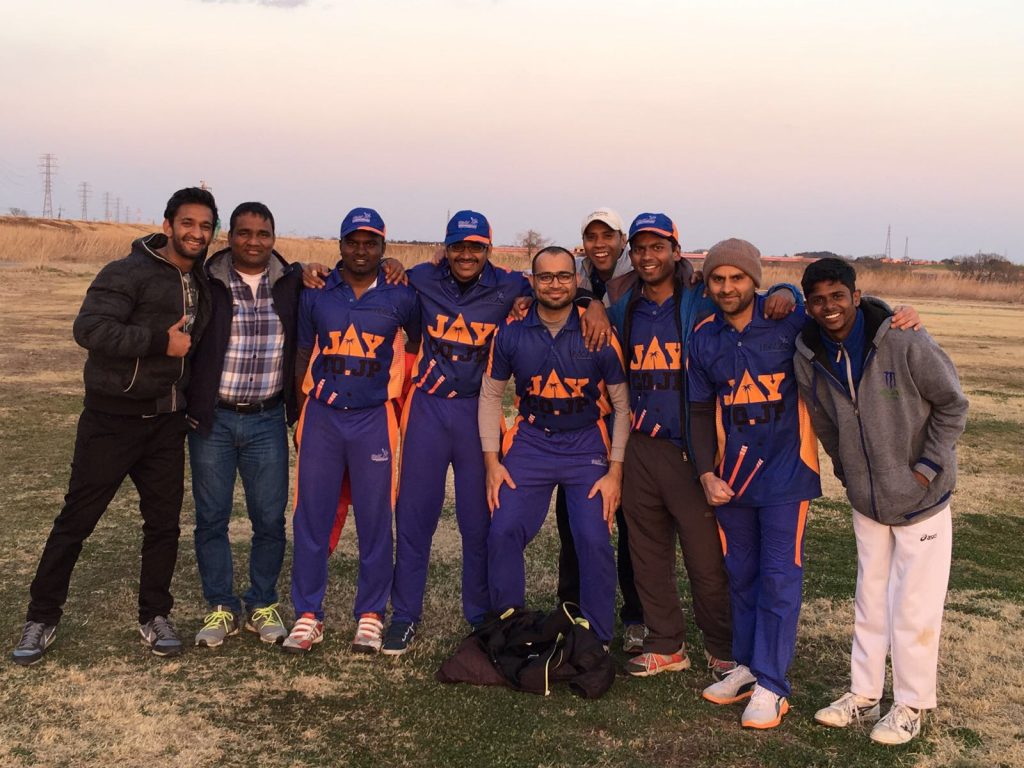 It was a beautiful sunny day for cricket, one couldn’t have asked for a better day than this to start this year’s cricketing season. The earlier we thought to reach Sano 3, the late we arrived there. This was due to few last-minute drop-outs and heavy Saturday morning traffic on the highway. Our own Michael Schumacher (Pavethy) was behind the wheel along with Suresh, Praveen and myself (Raman). Manu was driving in company with Prashant Kumar (PK) and Prem as usual on his bicycle was the first to reach on time to the ground. Saif, Samir and Rahul were piggybacking on the opponent’s car, who were also late to arrive. By the time we arrived, Manu & Prashant had already picked up the ground stuff and along with Prem had arranged everything to make up for the lost time, showed their real commitments for the game. However, delay in reaching the ground didn’t deter our spirits.

The skippers (Pavethy & Sameep from Falcons) decided to have two games, a T20 and a 15 over game respectively to compensate for the lost time.

Match Report
Falcons won the toss and decided to bat first. IECC had a good warm up session with running, stretching and catching practices. After which there was a team huddle welcoming the new members and introducing everyone. Pave with his regular motivational speech charged up everyone. We decided to utilise these warm-up games as preparation for the upcoming season.

Raman Tanwar started the proceedings with the new ball and soon produced a thick edge from batsman (Manish) on the 3rd ball of the over. The edge was loud enough that everyone could hear except the umpire. The second over was given to newbie, Rahul Manohar but he couldn’t bowl to his full potential, his short of match practice was clearly visible and he conceded quite a few wide balls. While the batsmen took him lightly he bowled a beauty of delivery to get rid of Kuldeep. (Caught by Pave in slips).  IECC tried to keep on the pressure but batsman Manish was able to manoeuvre the ball more often and kept the scoreboard ticking. The partnership between Manish and Rahul bought change in bowling and Pave introduced Prem, ever so accurate in line and length he tried to put breaks on the run flow and got succeeded up to a certain extent but wickets were not coming. Pave introduced Manu from other end and in tandem with Prem, they both stopped the run flow. But Manish was able to find the boundaries at ease whenever he was on strike. Pave understood the need of the hour and introduced another spinner in the form of Samir Ghosh from one end. Samir being a newbie wasted no time in showing his expertise in leg spin. He slowed down the pace and put more revolutions which got Manish stranded plumb in front of the wicket. Soon he dismissed the Falcons skipper with another beauty and bowled him. Later, Manu too joined the party and sneaked one through Rahul’s defence and bowled him.

Falcons couldn’t play flighted spin deliveries and soon the skipper introduced Saif. Saif dismissed Sagar, who wanted to hit him out of the park but missed it completely and was stumped duly by Prashant Kumar behind the wickets. From 100/1 in the first ten overs, falcons lost their momentum and became 124/5 in 17 overs. Searching for runs they tried to steal a single from Saif and Ankur found himself short of the crease. The skipper and Suresh bowled the end overs and enjoyed themselves by picking up a wicket each. Falcons were 142/8 at the end of 20 overs. All the bowlers especially spinners did an excellent job.

After a good come back from our bowlers, it was time for our batsmen to join the party and they didn’t disappoint either. Saif was asked to open with ever so dependable Prashant Kumar. Both batsmen didn’t let the bowler settle and cruised to team fifty in no time. Saif, in particular, was very severe on anything loose and made full use of power play. While we were assured that the openers will win the game for us Saif (35) played a false shot and was bowled by Manish. It was a great batting display by Saif, his best I have seen. In came Suresh to bat and took the assault to the bowlers. He played some amazing shots, the six over mid-on was treat to watch for many of us. Suresh was in a different zone and meeting the ball right from the middle. He played some of the fantastic lofted cover drives. On the other hand, Prashant Kumar was quietly scoring his run and playing elegant delightful shots, which normally we associate with him. Generally, very quick Prashant (37) was caught napping while taking a run and was run out. It was unfortunate but he did his job very well and when returned IECC was already on the verge of victory. In came the next batsman Raman and he played a few lovely shots especially the flat six over deep square leg was a pleasure to watch. Suresh (29) wanted to finish the game early and against the run of play, threw his wicket by getting run out. Captain came next and it was mere formalities from there on. Raman and Pave finished the game with utmost ease.

It was a very good team effort. Everyone contributed their best and IECC got an easy victory.

Match Report
T
he captains had already decided that each side will bat first irrespective of winning or losing.  IECC was first to bat in the 2nd Game and decided to give chance to players who couldn’t bat in first match because of excellent batting display of team. Rahul and Pavethy were the openers this time and before the scorers could settle down, Rahul got out. He needs more practice to regain his skills for this season. The next batsman was Praveen, who fell immediately to the next delivery leaving next batsman Manu to defend the Hat-trick ball. Manu did it with ease and started his innings. Manu soon went for a lavish shot and was excellently caught by Sandeep at short point. Pave on the other hand was as cool as cucumber and tried to steady the ship. However, his partners at the other end were not responding, quite similar situation for Pave since last year in T20 games.

In came the next batsman, Raman, who along with Pave tried to stop the flurry of wickets. Pave and Raman steered the innings and played some attractive shots during their small partnership. When we thought that it will be another good partnership, Raman got out to a grubber that was too low than expected and he was LBW. Next batsman, Samir couldn’t stay at the wicket long enough either, he failed to be in the crease attempting a lofted shot and got stumped. IECC were reeling at 40/5 in 7 overs. Pave decided to counter-attack by making some quick runs and running hard. But Prem, unfortunately, slipped on the grass while running a tight second run and was run out.

While wickets were dumbing at one end, Captain cool held his nerve and took the responsibility to take the team through this difficult time. He was looking for a partner who can stay there till the end and walked in Suresh and used his experience in giving the strike to the skipper. Pavethy’s start was quite edgy and he did offer a couple of chances but Falcons failed to grab them. And this is what good batsmen do to you when you don’t hold onto the chances. Soon Pave started hitting the balls to all corners of Sano-3. A few of his strokes over Long on and Long off was treat to watch and with so much of ease, he cleared the boundary ropes. I think two of his strokes deserved 12 or 15 runs instead of 6 runs. Those were humongous shot. Both the Tamilnadu Boys made sure that team gets a big score. Suresh was in full flow in the 2nd Match also and hit one huge six over the bowler. “Brutal” should be the word to decide that shot. On the other end, Pave kept destroying the bowling and scored his Fifty in no time. After his Fifty he was unstoppable and accelerated the paddle even more. There was hardly anyone who could stop him and he kept on clearing the boundaries. The Final over of the match read like this – 4,6,4,6,2,4. Before anyone could realise, the team score reached 140 and Pave reached 96* in just 51 deliveries, scoring 26 runs in the final over. Had it not been a 15 over game, Pave could have scored a century, but he remained short by 4 runs for his 100. IECC finished at 147 runs for the loss of 6 wickets in 15 overs.

With enough runs on the board, IECC looked deadly in the bowling department. Raman started the bowling proceedings and somehow was not able find his line though length was good. Nevertheless, he kept batsmen in check and produced a good first over. Prem started from the other end and got Manish on 4th ball of his over caught by Saif. Next over Raman got better of Kuldeep trapped him in front of the wickets. He was clearly beaten by his pace. Next batsmen Taran and Gaurav tried to steady the ship and started to take singles but next bowler Praveen got the better of them and got Taran out of 2nd bowl and Pushkar in his next delivery. He took an excellent diving catch to get rid of Taran on his own bowling. Falcons were desperately looking for a partnership to stay alive in the game. In comes Sagar and with Gaurav, they put up a decent partnership. Next few overs wickets didn’t fall but runs were dried up. In order to accelerate the score, batsmen tried taking their chances on spinner. While runs were not coming, Sagar tried to steal a single in the cover but Sameer was alert and throw the ball direct to the bowler to made Sagar run out.  Against the run of play, Gaurav threw his wicket too and was run out by a direct hit by Pavethy. Sameep was caught and bowled by Pavethy in the next over and Ankur was left stranded on the other end with 15 overs done and dusted. Falcons tried hard to score but IECC bowlers were too good and restricted them for 118/7 in 15 overs.

It was a good start to the season for IECC where we won back to back matches. These warm-up matches tested the stamina of players also and a few of them might be having body ache but win must have relaxed their pain. IECC started their season on winning note and we all would like to carry forward this momentum for the whole season.