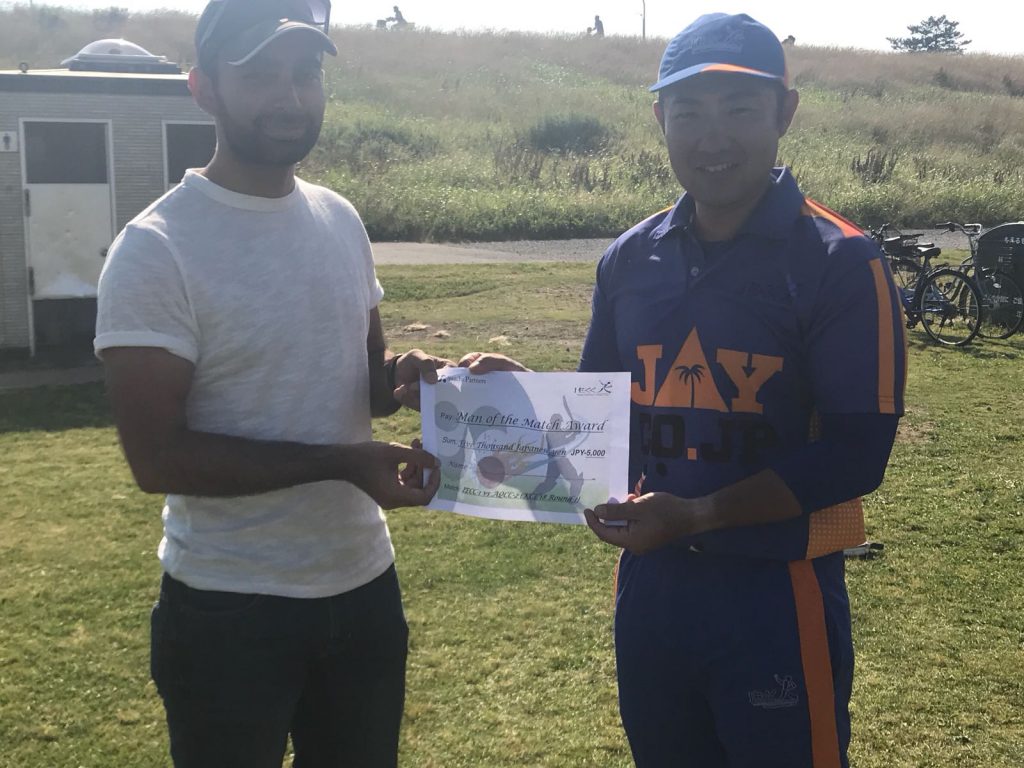 The opening match of the Engineers was scheduled on 3rd of June 2018 at Edogawa Sports Ground, Tokyo. A lush green ground on the banks of the Edogawa river looked beautiful. A perfect weather added to the perfect game of cricket . Engineers, led by Vinay Iyer, debuted four new players – Abhijeet (this reporter), Ashutosh, Rahul and Sameer.

Skipper seemed to have a perfect strategy of trying out the debutantes by electing to field first after winning the toss. Raman Tanwar, the Engineer’s precious stone, opened the bowling along with the debutante Abhijeet .Both kept the opposition openers guessing all the time with their consistent length and line, and beautiful swing bowling.
Alpha Quashers lost its first wicket in the very first over of itself when opening batsman Darshak went for a second run on a wide ball, eventually falling short of crease, thanks to accurate and sharp throw by skipper Vinay to the veteran wicket keeper Prashant Kale. Alpha Quashers suffered a set back in the very next over when the opener Rajaram was forced to retire when Abhijeet’s bouncer hit his right thumb. The second wicket fell shortly in the 4th over when Prasath nicked an out swinger by Abhijeet to Vinay at first slip, giving the bowler his maiden wicket in the KCL. The Raman-Abhijeet opening pair finished their opening spell after 7th over giving away only 14 runs.

Seeing the Alpha Quashers under pressure with excellent opening bowling, captain Vinay handed the ball to the next pair of debutantes medium pacers – Rahul & Asuthosh. The pair bowled till 13th Over with Rahul successfully grabbing his first KCL scalp trapping Jasmeet in front of his wicket on 29.

Skipper then brought the spinners, Sameer, another debutante, Sumon, Vinay, Bidyuth & Pandya. Sameer managed to pick 2 wickets while Sumon, Vidyut & Pandya picked 1 wicket apiece. That brought Rajaram, the injured player, back after fall of 9 wickets to support his team & scored 10 runs of 16 balls. Although the Engineers dominated the Alpha batsmen throughout the match some late hitting by Naga (23 off 21) & Tamil (22 off 38) saw them manage 141 all-out in 29 overs. The last batsman, Tamil, was dismissed by Raman, caught by Vinay.

After the break, the Engineers started their chase with their openers Prashant Kale and Masamo Kobayashi. The Engineers openers started in style with scoring boundaries at ease and keeping the run rate above 10 runs per over throughout the match at ease. Bowlers bowled inconsistent lines and were punished by the openers each time when they erred in line and length. Dropping Kobayashi twice, both being dolly chances, did not help their cause either. The openers cashed on this opportunity and both scored their half-centuries. Prashant was the first one to reach his fifty and eventually went on to score 74 runs before bring bowled by Tamil.

After Prashant, Bidyut joined Kobayashi but did not last long and was LBW for  5. But it was too little too late for Alpha and Engineers saw home with Kobayshi completing his fifty. Engineers won comfortably by 8 wickets  chasing their target of 142 in just 14 overs.