Match Report
It was a rematch of last year’s KCL final, at the same ground, with the relatively revamped Engineers taking on the mighty Samurais with a new captain at the helm. The game also ended the same as last year with Samurai walking away with the title after a thrilling hard-fought game.

With the ever-so-reliable and ever-so-under-appreciated Pavethy and Anurag behind the wheel, along with the train-preferring group, the Engineers reached Sano (the venue) well before the game start time.
Under the always-smiling never-cursing practice manager, Prashant Kale, the Engineers started their regular warm-up and pre-game practice. This has been one major improvement that the Engineers have made this season, which has ensured lesser injuries, and has also helped with team bonding, and the practice manager has played a major role in it. 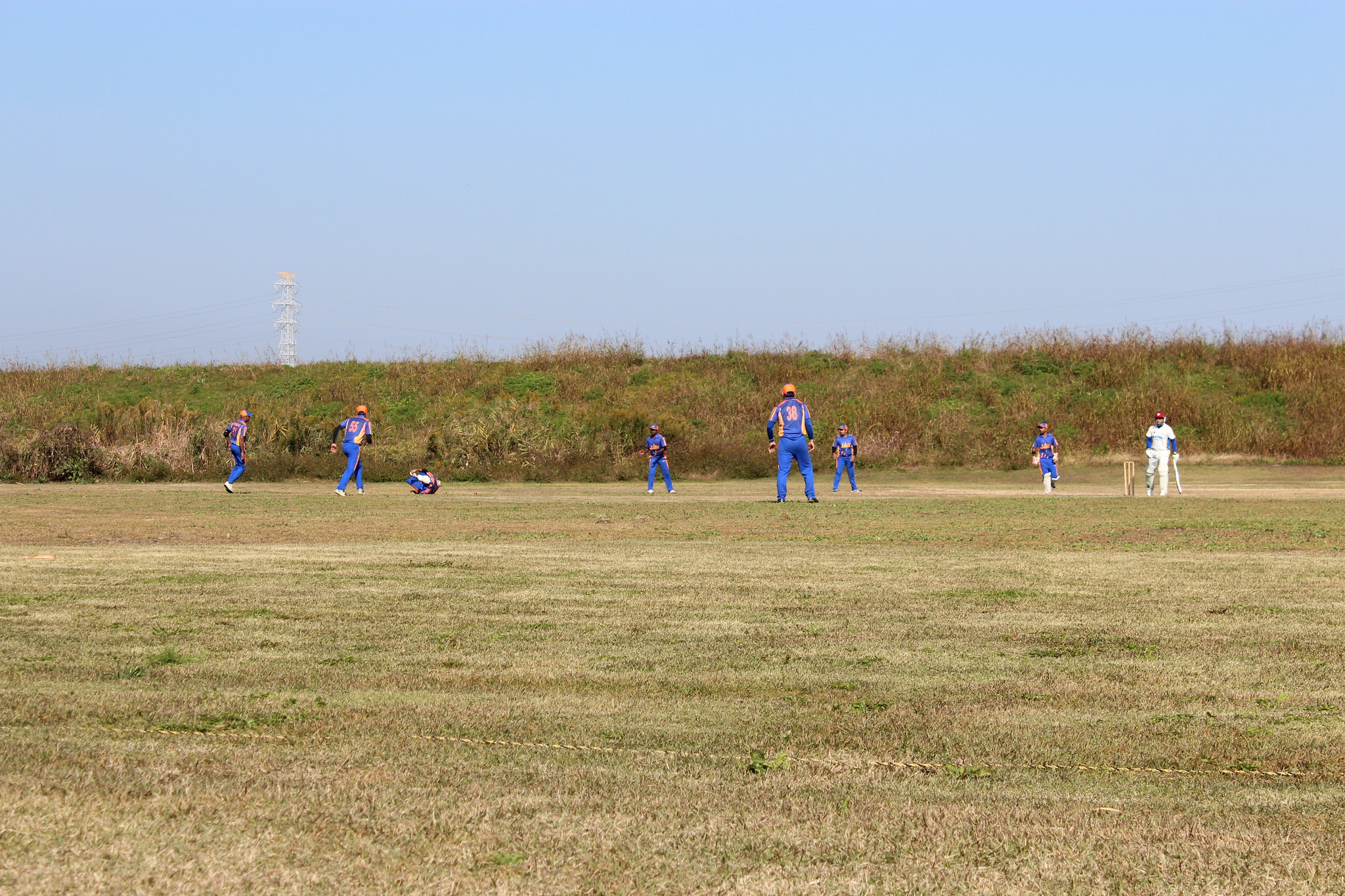 Samurai won the toss and as was expected they chose to bat first and put run on the board in the pressure game.
The new ball for the Engineers was shared by veteran Rajneesh, and Anurag in the absence of Biju Paul, who was busy stalking the Indian Prime Minister who was visiting Japan for the weekend.
Rajneesh as expected and as always started the proceedings with perfect line and length. With the crap KCL balls this season, which look a game old after a couple of overs, Rajneesh wasn’t getting his usual outswing, but he managed to get one nip back in, inviting the edge of Samurai opener Raza. The first wicket brought in Chula, who joined ex-captain Hanif at the crease. Both batsmen started rather cautiously but were still going at a pace of run-a-ball.
After a few good overs by Rajneesh and few wayward ones by Anurag, the captain brought on left-arm spinner Dhaka and right arm medium Raman. Both the bowlers started well and bowled a couple of good overs but were unsuccessful in breaking the partnership. The batsmen had grown in confidence and were starting to take the bowlers on, backing themselves to clear the short boundaries. Vinay brought himself on, hoping the change would do the trick and break the partnership, but he was also taken for a few runs. Halfway through, the scoreboard read 132 for 1.
In the middle overs, a lot of chances were created but the usually bankable Engineers failed to grab onto those. The most important one, probably was of Chula. After completing the half century, Chula trying to up the tempo further drove a full ball in the air to long-off. Saif patrolling the boundary misjudged the catch and run in too quick, missing the ball and injuring his head in the process. Glad the ball missed the eye and there was no grave injury. Other than this there were a few more chances, which the Engineers hope that they would have latched on to.
Vinay tried a few more bowling options, bowling Prashant Kale, and bringing back the opening bowlers but everyone was taken for runs.
By 25th over, Samurai were cruising at 244 for 1, with completing his century and Chula in late 80s.

Desperate to break the stand, the team dentist, Pavethy, was called on to bowl his dibbly dobblies. With the street smart cricketer that he is, Pavethy managed to trick Hanif into spooning one up to extra cover, with Amigo (Kobayashi) running in from long-off to complete a fine catch.
This was exactly the opening that the captain was looking for. He came back for his second spell the next over and made sure that the new batsmen could not score freely. Both Vinay and Pavethy, followed by Dhaka bowled well in tandem and kept making breakthroughs.
The scoreboard after the allotted 35 overs read 280 all out, with the last 10 overs accounting for only 36 runs and 9 wickets. Vinay the pick of the bowlers, picked up another five-for.

The momentum was in favor of the Engineers, and although the required run rate was almost 8 an over, the Engineers were backing themselves to get it.
After a little break and a lot of banter, the Engineers started the chase with Prashant Kale and Abdul opening the batting. Samurai looking to take the pace off the ball, which is one of Kale’s two favorite things, the other being a Smirnoff Lite, started with spinners from both ends.
Kale being in great touch, took the attack to Sujith and launched him for a mammoth six over the mid wicket boundary, followed by another four. He took the attack to the other bowlers too and made sure all the bad balls, and a few of the good ones, were hit to the fence.
With the spinners going for runs, Supun brought on the pace of Yasith which brought immediate results, with Abdul getting trapped in front beaten for pace.
Amigo came in to replace Abdul, and the sensible batsman that he is made sure that there were no more quick wickets. He kept rotating the strike but was having a little trouble in getting going. Kale on the other end was in a different zone and was middling almost every thing. With 70 on board after 11 overs, Supun called on Hanif, Kale’s nemesis, to break the partnership. The plan worked perfectly for Samurai, with Kale missing a fuller delivery headed for the stumps.
The wicket brought Vinay to the crease, and along with Kobayashi, he started steadying the ship, the role he has had to play almost too many times. However, the Samurai bowlers kept bowling good lines and kept inviting mistakes. Chula took out Amigo, followed by Hanif taking out Prashant Kumar, reducing the Engineers to 89 for 4 after 14 overs.
After the fall of Prashant Kumar, Pavethy joined Vinay in the middle, and smacked the first ball he faced over extra cover for a boundary, followed by consecutive fours in the next over off Hanif. The ease and comfort showed by Pavethy at the other end, brought Vinay the freedom he needed. Vinay also took to the bowlers, stepping out to the spinners and depositing them over the fence multiple times. The ease with which he was clearing the boundaries was a treat to watch. The duo put on a partnership of close to a 100 runs, taking the Engineers closer to the mammoth target. 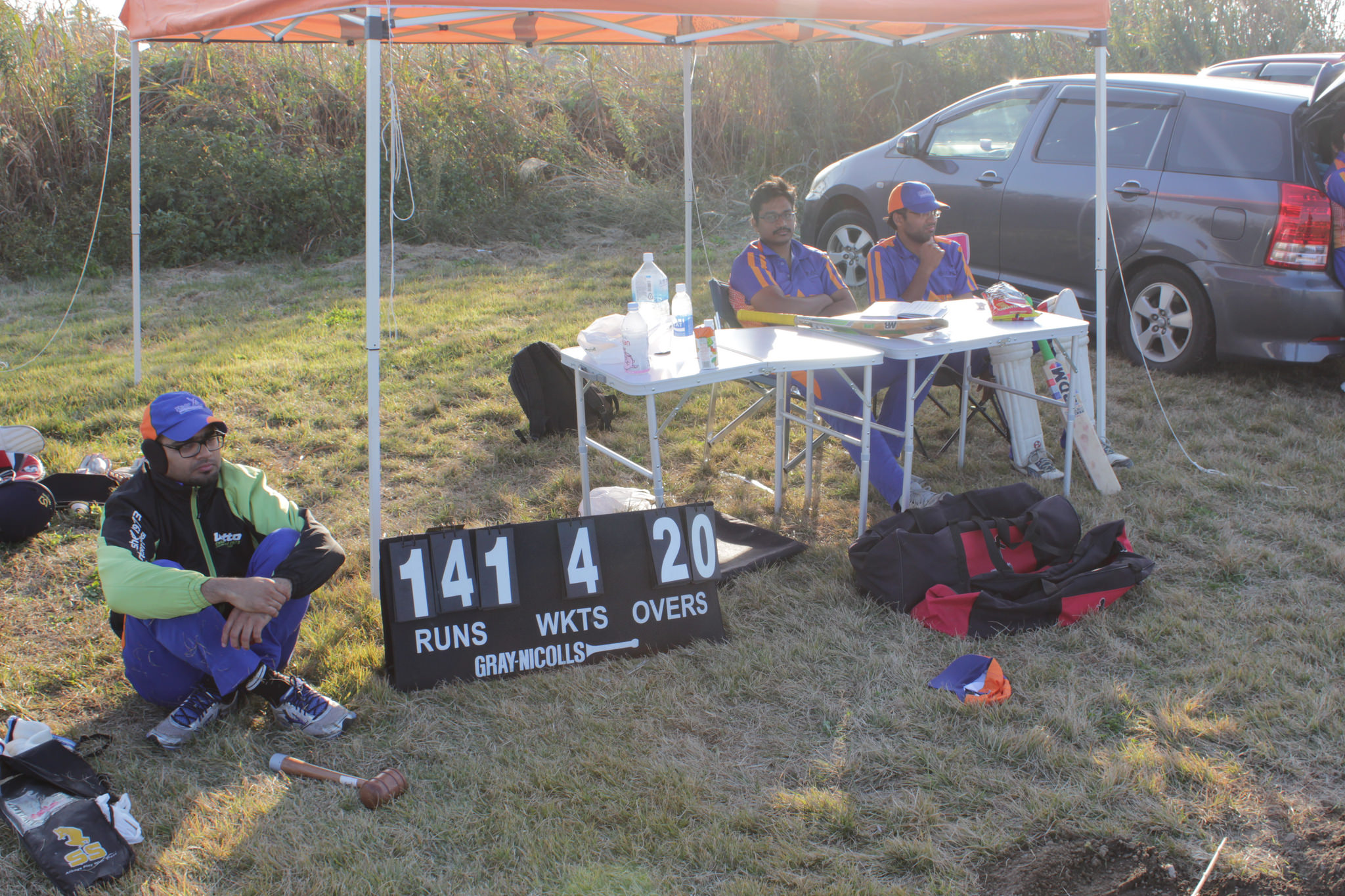 With the engineers cruising at 180 for 4 in the 25th over, against the run of play Pavethy ended up getting himself stumped off Yasith. With almost 100 to go at 10 an over, the Engineers had Vinay at crease and 5 more wickets in the kitty. The next few batsmen, namely Anurag, Dhaka  gave Vinay company but not the support that he needed. With 60 odd left to chase, Vnay, against the run of play fell to his nemesis, Chula, trying to run it down to third man handed a catch to short third man.
With only two more wickets left and 50+ to chase at 12 an over, everyone thought that Vinay’s wicket was the final blow to the game. However, Raman, who was batting way down the order for some reason had some other plans. The first over he faced he took to the spinner Rangana, launching him for two huge sixes over midwicket, followed by a boundary off the last ball of the over. Himanshu tried to up the run rate but ended up losing his stumps to Yasith. In came Rajneesh who was determined not to lose his wicket, as advised by the captain. He kept rotating the strike, making sure Raman got to face as much as possible, and Raman made sure that he kept getting the boundaries in every over.
With Yasith bowling a good penultimate over, Engineers needed 24 of the last over of the innings. With the way Raman was batting it did not seem impossible, but as they say it was not supposed to be. A couple of dot balls meant that the Engineer ended up on the wrong side of the line, falling 12 runs short of the elusive title.
Overall, it was a great thriller of a game with everyone chipping in, be it with the bat or the ball, not shying away from the challenge, not buckling down under pressure.
There was great support from Manu, Suresh and PK, who showed up to cheer for the team and helping out with scoring and taking the field when needed.

Albeit not perfect, it was a great end to a good season of cricket. The team has great bonding off the field, which shows on the field, with guys backing each other when the chips are down. Although I wouldn’t name anyone here especially Pavethy and Vinay, that some of the comments tend to be overly critical ;).
It was great playing with all of you this season and with this momentum, I have a feeling that the next season is going to be an even better one for the club. See you all next year