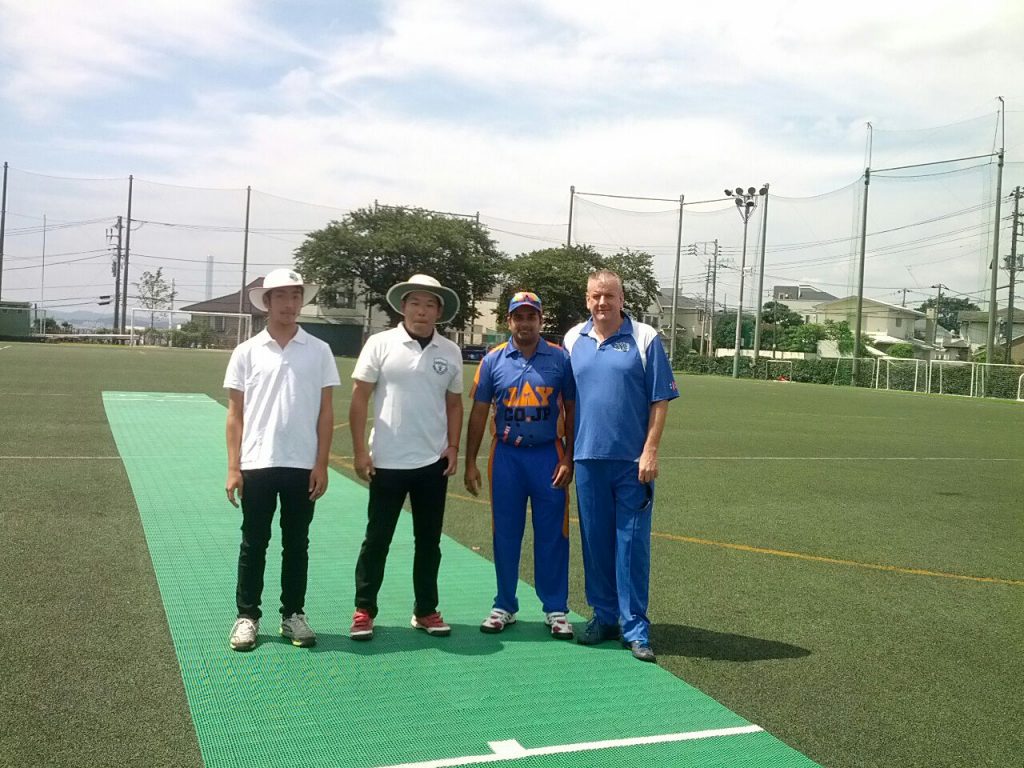 A TIE game in last League match of Japan Cup almost cost us the straightforward entry into finals. IECC needed to win rest of the games convincingly against YC&AC and BECC to boost run-rate. This will ensure that we remain in race to enter South Kanto Division Finals to enter into Japan Cup T20 National tournament.

Winning the Toss, Captain Vinay Mohan Iyer, Your writer, knew exactly what was to be done. Batting first, we started with the same opening pair as in the last game; Anurag & Vinay and did justice to power play with 44/0 in 7 overs until Anurag was out for 18 runs (2×4,1×6). This brought in the “Dark Horse” Pavethy who is well known for his stylish photogenic drives. Vinay & Pavethy took off from there stealing quick 1’s & 2’s which was frustrating for the opponents. With 100/1 in the 13th over and Pavethy all guns blazing, IECC was looking for yet another mammoth total around 180-200 with 9 wickets left until Pavethy was struck on his pads of the bowling of Veteran Fayaz Khan. He fell 7 runs short for his half century but he managed his 43 runs in just 31 balls. (4×7)

In came the famous, Japan international, Prashant Kale who was expected to take IECC to their target of 170-180. In very next over Vinay tried to flick one off the pads which he thought was going too down the leg side but the AGCC Umpire thought exactly the opposite and was given LBW. Vinay ended his innings on 38 runs (24b, 4×4).

Kale in the same over lofted a huge six but perished quickly trying to accelerate scoring and suddenly we were down to 124/4 in the 15th over. Suresh G.V & Prashant Kumar were the 2new batsmen in, with almost half of the side back into the Pavilion, 170-180 looked too far but yes 150 was always on the cards as we have always seen IECC batting line-up goes deep up to no.10-11 but who knew we would repeat history much often as a Sunrise or Sunset.

Sensing the opportunity, veteran Fayaz khan of YC&AC started testing batsman patience with teasing loopy off-spin on flex mat. He picked Suresh (2) & Prashant Kumar (1) & Saif (2 consecutive golden ducks). Manu who seemed promising in the previous game was pushed up the order but just managed another duck in 3balls. Rajneesh Shukla & Bidyut managed to open their account but they short-lived before being bowled & LBW for 3runs & 2runs resp. Prem S. managed to remain not out on 1. From 100/1 to 124/4, finally we could manage only 130/10 in 19.1 overs. It was yet another disappointing performance from the middle order. Fayaz Khan in process earned his first 5 for in T20 game against IECC.

Knowing the job, our bowlers came in with a good fight with our usual Opening duo, Rajneesh Shukla & Anurag Singh. Rajneesh has been the most economical bowler for IECC over the years and the breakthrough bowler too and he did it in his very 1st over when he got the wicket of the dangerous Anton Winston who tried to go over the infield but was caught straight at mid-on by Manu B. Anurag at the other end with his furious pace was troubling the batsman before he got one caught behind by P. Kumar which he fumbled but was cleaned up by Suresh a 1st Slip, good team work & good presence.

Prashant Kale replaced Rajneesh and continued tight line and length. He picked his 1st wicket in his 2nd over and there on, he added 3more crucial wickets to his tally which packed up half of the YC&AC side into the pavilion. Kale finished his spell with figure of 4(o)-15(r)-4(w) and YC&AC were 33/6. Alert fielding meant two quick run-outs added to tally. One of them a cheeky one by Suresh and YC&AC were 45/8. The final rituals were completed by Prem who took the final 2wickets in 1.1overs giving away just 1run and YC&AC were All Out for mere 55 Runs giving IECC a victory margin of 75runs.

Quite a lot of positives especially in the bowling department. They build pressure by maintaining good line and length and bowling changes worked like magic. Batting woes however continues. Hopefully we will sort this by next game. A dominating win in last league game against BECC will create strong chance for us to play the finals.