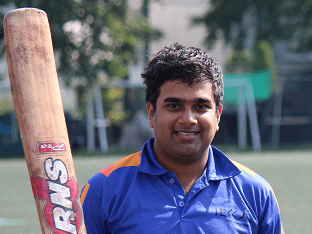 Don’t knock the weather. If it didn’t change once in a while, nine tenths of the people couldn’t start a conversation.  in my case i wouldnt start the Report-writes saif  Raj

Firstly, let me welcome the debutants to IECC family – Adrit Jain, Masaomi Kobayashi and Prashant Kumar. All the best and hope you guys have a good time.

Nature was not turning out to be kind enough; there was persistent rain in the build up to the match. Strong winds blowing across the ground throughout the day also threatened to put off our first match of the season.

Bowling by Aoyama CC was below par to say the least but cannot blame them for the effort on the field. Fielding was up to the mark with some brilliant out fielding effort by AGCC. At a little over halfway stage both batsmen had crossed half centuries at a brisk rate. Kobayashi perished in search of quick runs for a well-made 73(45).

Vinay upped the ante and with some lusty blows with good support from Pavethy at the other end. Score reading 150 for 1 at 15 over mark and Vinay at 60. 16th over yielded 20 runs; all coming from Vinay’s bat. I bet Vinay was not thinking what the whole team was thinking – a chance to score a century. From there on it was carnage, amazing display of stroke play by Vinay.

By 18th over Vinay reached the land mark with boundary over midwicket as the entire team rose to applaud a stupendous effort.

With all due respect to Aoyama G. CC the match was all but over.  AGCC was never going to chase down a mammoth total against the bowling might of IECC.Opening spell started by ever reliant Rajneesh and tear away spearhead Anurag. AGCC openers survived the first over unaware of what was going to hit them next.

Hit they were, by the pace, swing and aggression of Anurag who was in no mood to let go off the hard work and muscle built during the off season.

The batsmen were on their toes while playing him (or not so) all the time.One ball whizzed past the ears and the other would rattle the stumps – It was the beginning of an end. Awesome display of fast and accurate bowling saw wickets being rattled 7 times in a span of first 8 overs. 6 of which snapped up by Anurag in a 4 over spell, all bowled. At the end of 8 overs, score read 27/7. AGCC all but finished even before it began.

The last few wickets was going to be a formality for IECC and it was about going through the emotions for AGCC. IECC wrapping up the ACC innings with a professional and dominating performance. At the end IECC made light work of AGCC batting, gunning them all out for a meagre 58.