Initially it looked like we can’t play this match due to lack of players as the Kerla-Japan festival was also scheduled on the same day; But we somehow managed to get an 11 just before the match day. Even though this was not a full strength team and we were sure that YCAC will definitely field their best team following defeats in last two matches, the IECC captain was still hopeful of making it a hat-trick.

Fielding first, IECC started the bowling with Ashok and Rahul. Ashok at his usual best produced a easy chance on his 4th delivery when YCAC opener Nick mistimed a pull. There was slight confusion between the shortleg and midon fielder and shortleg eventually dropped it.

Rahul bowling with the new ball for the first time for IECC, also bowled beautifully with accuracy and swing and scoring was difficult for both batsmen. Mostly the runs were coming via occasional extras.

There were many catching chances(at lest 5) that came our way but we managed to drop them all, and the openers survived until the 15th over when a direct through from Ashok caught Nick short of his crease.

IECC was on top at that stage as almost half the innings was gone and only 56 runs were on the board.

Next batsman Kamran, tried his luck and played some risky and some very good shots but eventually got out to a well judged catch at the fineleg boundary by Rahul.
Pramod being the bowler in this case. Prashant also did not last long as Pramod manged to swing a ball in the air to disturb his middle stump. Promod and rest of the bowlers Sanjeeb, Rahul and Ashok rapped up the YCAC innings by the 33rd over for the score of 151.

It should also be mentioned that Atul, keeping after a long time, did the job beautifully in Bobby’s absence and saved some valuable runs and even managed one stumping.

Chasing a relatively easy target Masood and Atul opened the batting for IECC. Masood started promisingly hitting the first ball from Prashant for a boundary but got out LBW couple of deliveries later when he missed a flick. And when Atul also got out to a swinging delivery from David in the next over, the target suddenly started looking a competative one.

Next batsman Pramod playing for the first time for IECC displayed his cool head and sound technique when he negotiated the new ball with ease. On the other end Santosh batting at No 3 for a change was on his usual aggressive Viru(Shewag) mode when he hit Prshant for 3 magnificent boundaries on his 2nd over. However Santosh was the next to fall when he misjudged the bounce of a straight delivery that crashed into the stumps. By that time though he had made a brilliant 28 and has set IECC on course for a victory as IECC was crusing at 7 runs per over at that point.

IECC was needing another 71 runs to win the match on the 10th over. But some disciplined bowling from Kamran and Chatan reduced IECC to 113/6 by the 20th over and the possibility of a surprise IECC loss started to emerge. But Pramod’s calm presence at the crease and knowing that the asking rate is not that great, gave strength to the batsmen at the other end.

YCAC was still in the money when Javed walked into bat at No8 while the score was reading 135. But some big hitting from Javed including a huge Six that almost crossed the net and landed on one of those houses, sealed the match for us on the 30th over.

In the end it was a interesting match with lots of ups and downs and a great team effort where everyone played their part to handover a record hattrick win to IECC agaist YCAC. 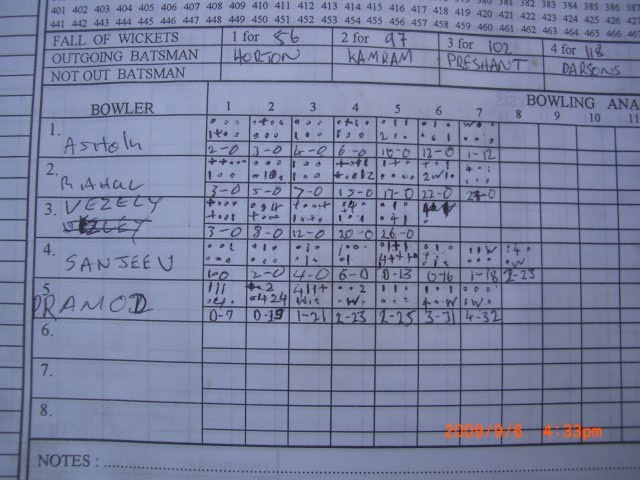 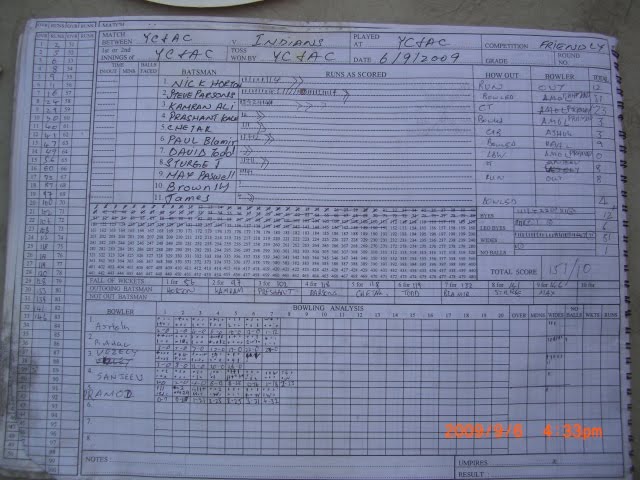 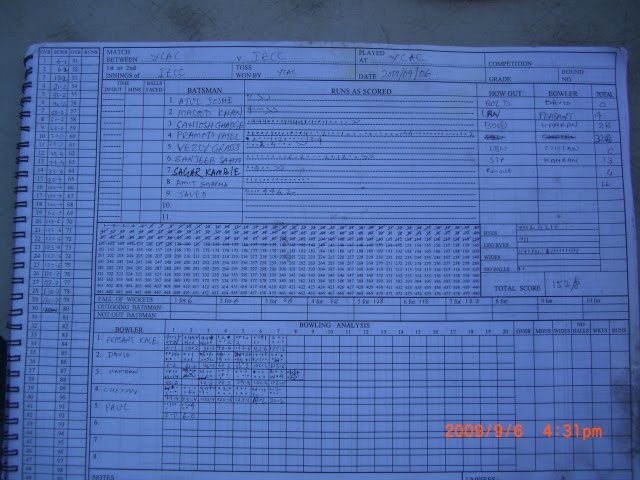